Interview with Professor Klaus MAINZER, President of the European Academy of Sciences and Arts

Exclusive interview, conducted by Ms. Eugenia Tofan, Press Service of the Academy of Sciences of Moldova

The European Academy of Sciences and Arts (AESA), founded in Salzburg, Austria, in 1990, one of the highest European scientific forums, recently elected a new president - Prof. Klaus MAINZER, philosopher and scientist, research field: The paradigm of self-organization, chaos theory, artificial intelligence, logic, epistemology, cognitive science (each from a philosophical perspective), the Technical University of Munich, the Department of Philosophy and Philosophy of Science.

EASA is the expression of the spiritual unity of Europe, as well as of interdisciplinary science and art at European level. The academic forum counts about 2000 personalities, within eight sections: Humanities; Medicine; Arts; Natural Sciences; Social Sciences, Law & Economics; Technical & Environmental Sciences; World Religions; Corporate & Public Governance. The European Academy of Sciences and Arts has 4 protectors, 25 honorary senators, and 32 Nobel Prize winners are part of the academic body.

It should be noted that the European academic forum also includes 10 scientists, well-known personalities from the Republic of Moldova. In order to make better known to the scientific community of the Republic of Moldova, but also to the interested public, the name of the new president of AEȘA, the intentions of collaboration with the scientific community in our country, but also the priorities on the agenda for the next 5 years, the Press Service of ASM requested an interview with the newly elected President, mentioning the honor of visiting the High European Scientific Forum in March 2017, when Academician Eugen Doga was presented with the insignia of Full Member of the European Academy of Sciences and Arts in Salzburg.

1. Dear Professor Klaus Mainzer, you have certainly received congratulations from Prof. Ion Tiginyanu, President of the Academy of Sciences of Moldova, on the occasion of your election as President of the prestigious European Academy of Sciences and Arts, a message to which the scientific community of the Republic of Moldova subscribes. We are honored by the opportunity to give us an interview which indisputably is warmly awaited by the scientific community, people of culture and art in the Republic of Moldova.

You came into office in a difficult period, in the context of a turning point, generated by the coronavirus pandemic that affected the entire world in terms of social, medical, economic, psychological. Under these conditions, you and your deputies begin a 5-year term with many challenges, responsibilities and new decision-making. What will you start your mandate with?

The pandemic crisis demonstrates that we all are living in one global world. We do not only share all kind of information by the digital media, but also a terrible virus by our close contacts which are made possible by our worldwide traffic and trade. We are no longer living in isolated countries and nations. That is also true for the academic world. Therefore, the mission of the Academy is the „spiritual unity of Europe“ (§ 2 by.laws).

The unity of the academic world should be supported by interdisciplinary work of scientific disciplines. Therefore, we intend to realize a topic network which is oriented, e.a., to the agenda of the EU with digitalization, artificial intelligence (AI), environment, climate, health et al., but also to the sustainability goals of the United Nations (UN) for economic welfare and peace. In these cases, we need the different expertise of our members in the different classes of the academy for interdisciplinary project work in cooperation with European and international partners.

We must combine the innovation power, technology, and economic dynamics of Europe with the cultural and spiritual roots of this old continent. That is the profile of our Academy.

2. Because changes in all areas of life are inevitable, including science and art, what priorities will the European Academy of Sciences and Arts have in the next 5 years? What is your opinion about the role of science and art to be played in the future?

The pandemic crisis demonstrates that, in future, science must be the basis of our political and economic decisions. In the past, some political leaders believed that we could make a “deal” with nature. But, pandemics and climate change are not determined by the rules of economic markets, governments or political parliaments. Pandemics and climate are determined by natural laws which can be studied in mathematical models. Personally, I am engaged in this kind of research since many years. The dynamics of these complex systems such as climate or pandemics depend sensitively on tiny changes of initial conditions and constraints. If we miss critical values of control parameters (e.g., pollution in climate models or infection rate in pandemic models), then the whole system can become “chaotic” and that means out of control (e.g., exponential infection rate) with the collapse of the whole health system of a country. Mathematically, that is called “nonlinear” dynamics. In short: We need a close cooperation of science and political deciders, in order to handle the future of mankind.

But the pandemic crisis also highlights the role of arts and culture in the future. The hard lock down in Europe has severe psychological effects. People must miss public events of music and entertainment. They must no longer go to theatres, concerts, or museums. Their souls suffer and can be damaged in the long run. Anyway, the important role of arts for our mental health is also demonstrated by the pandemic crisis. Therefore, I am very happy that our European Academy is dedicated to Sciences and Arts, because both belong together.

3. Researchers, people of culture and art face new challenges. Now, as never before, we need an unprecedented consolidation of the scientific communities to overcome this situation that has forced us to reset our habits of existence, which calls into question socialization and freedom, the isolation becoming the most effective form of defense. What will the European Academy of Sciences and Arts undertake about it?

The growth of science and arts is only possible with socialization and freedom. Innovation dynamics in modern technology needs global exchange of knowledge. They are organized in research groups which are in a world-wide cooperation and competition. Young people in science and economy must learn to cooperate in teams. Artists are sometimes more individualistic characters. But, nevertheless, they also need an open-minded world of communication and exchange of ideas.

In general: We need open markets, fair trade, and free communication. A small country like yours heavily depends on the conditions of fair trade with the powerful markets in the world. The European Academy of Sciences and Arts use the global networks of its international members in cooperation with international institutions to support these goals.

In this sense, I would like to refer to the unique moment I lived, visiting the European Academy of Sciences and Arts, accompanying academician Eugen Doga, in 2017, at the award ceremony, the composer who made Moldova known to the whole world through music, in particular through his famous waltz which was designated by UNESCO among the four musical masterpieces of the last century.

Sometimes, „small“ also means „smart“. Your country is a wonderful example with distinguished abilities and gifts such as your impressive contribution in music. You are very welcome to enrich the diversity of different cultures and nations in the European community. But, our Academy is not restricted to the boundaries of the EU. We also have members of Russia, USA, Canada, Australia, and asiatic countries. Our collaboration does not depend on the size of a country, but on the value and quality of its contribution in science and arts. Therefore, we look forward to our future collaboration with the Republic of Moldova.

5. And the last more traditional question. What wishes you would like to pass on to the members of the European Academy of Sciences and Arts for the New Year 2021?

We all hope that an effective vaccine will come soon, in order to overcome the pandemic crisis. In this case, we must not forget that, again, it was a scientific innovation to handle a big problem of mankind. So, I wish that we all learn from this global crisis to be better prepared for the global challenges and a sustainable future of our planet 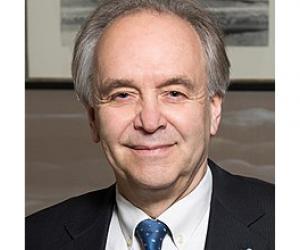